3 season-opening races in 3 states. In one weekend.

Race 1 of 3: John Barnes and the Yokley Racing Team left Nashville, Tenn., on March 1 with STI-equipped Polaris RZRs to race the season openers. Co-Pilot John Cripps rode shotgun for the challenge as co-pilot. The races? The Pro UTV Racing opener called the Dirty Turtle in Bedford, Ky. The IXCR Round 1 race in Attica, Ind., on Sat. Mar. 2 at 5 pm. And the AXCC Round 1 event in Bulcher, Texas, on Mar. 3. The tires and wheels? STI Roctane X2 tires on STI HD9 Beadlock wheels.

Barnes and Cripps started the weekend with a fast two laps of racing until an oil seal in the RZR Turbo let loose, ending their race. “The racetrack had fast sections in it and several hill climbs,” said Barnes. “It was our first time running the STI Roctane X2 tires and we couldn’t be happier with the performance. We made most of our passes on hill climbs because our tires hooked up better.”

As soon as Barnes came off the track, the team loaded up for the 200-mile drive to head to Attica, Ind. for the afternoon race.

Race 2 of 3: On a track featuring deep but high-speed deep sand whoops and tight woods sections, Barnes took off to a fast start from row 1. He came out in the lead, and the Polaris RZR set a fast pace into the woods. The team battled in the top five all day and would come out with a third place podium finish.

“My RZR handled so well,” said Barnes. “I was very satisfied with my Super ATV control arms/2.0 axles combined with Elka Suspension which soaked the rough stuff and allowed us to endure the tough event. My STI HD9 Beadlock wheels and Roctane X2 tires hooked up awesome and took us to a holeshot.”

The team loaded up – no time for podium celebrations – for a long drive to north Texas and the American Cross Country Championship Series race.

Race 3 of 3: Stress on the starting line when Barnes found a failing radiator fan caused the machine to run hot. Team mechanic Jeffrey Woodard made a rush repair and the team took off. A bad start put Barnes midpack on the first lap. As he started working his way forward another racer got stuck in the trail, and Barnes made heavy contact. A little UTV body damage wouldn’t slow him down, and Barnes continued to hammer down the course. A tight track forced him to create new trails up creek beds and hills; some worked great and some did not.

“The track was really one lined,” Barnes said. “We didn’t get the start we wanted but battled to move up in the pack. On the final lap, we moved into a top 5 position then experienced belt failure. I changed it as fast as I could and came in 6th.”

“It was our first time running the STI Roctane X2 and couldn’t be happier with the performance. There were countless guys this weekend with flat tires on other brands that ended their ride. We had zero flats. What a tire! I’d recommend giving them a shot. You won’t be disappointed. If you are looking for a stronger grip, look no further than the Roctane X2.” 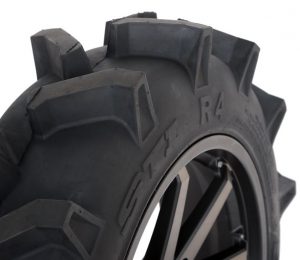 Mud-Ready & Made For U

Designed specifically for UTVs and ATVs, the new R4 from STI is a massive mud weapon for drivers serious about performance. Some “tractor tire” designs are made literally for tractors, while the STI R4 has U in mind – UTV and ATV, that is. Up to 35 inches tall for UTVs, and as 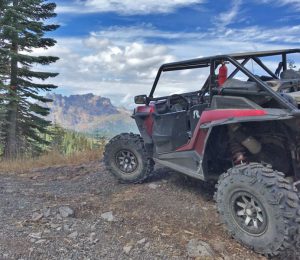 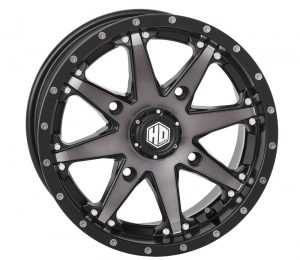 The all-new STI HD10 wheels bring a fresh level of style and a higher level of size to the HD Alloy family with 20-inch applications, plus 14-inch and 12-inch sizes. These new wheels are built with the same strength and durability as all HD Alloy wheels, and come with the STI lifetime warranty.